Duomo, the symbol of Milan, with its 135 spires, more than 3400 statues and 96 gargoyles, is one of the biggest Gothic churches in the world 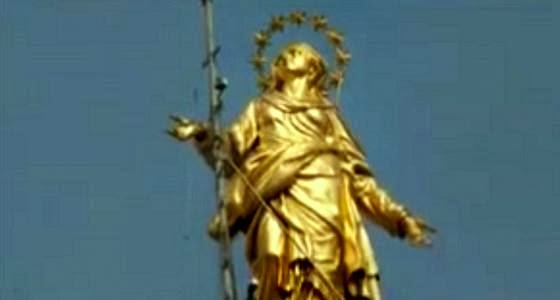 With its famous Madonnina, the golden statue which stands out from the biggest spire of the tiburium, the Duomo is an enormous cathedral, one of the biggest Gothic churches in the world. 157 metres long and 92 metres wide at its widest point it is situated in the heart of the city. 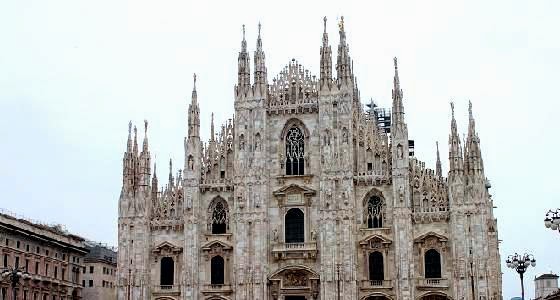 It was begun in the XIV century, at the wishes of the Duke Gian Galeazzo Visconti, and completed five centuries later. The foundations were laid on the site of the pre-existent church of Santa Maria Maggiore, which was built in the IX century. Many Italian, French and German artists devoted themselves to the construction of the Duomo through the centuries and this is the reason for the many styles still present in the vast and complex edifice despite which the work is incredibly harmonious. 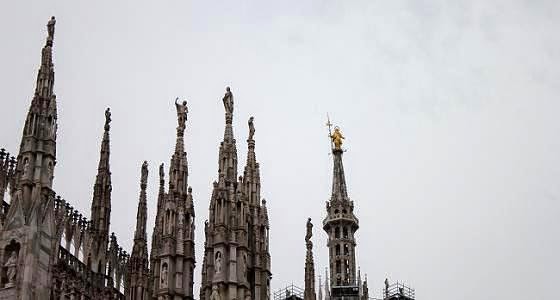 The most fascinating element is the roof with its 135 spires, more than 3400 statues and 96 gargoyles. You can go up by the stairs or lift and for the tourist it is an incredible sensation, not just because on a clear day you can see the Alps from here, but above all because here you find yourself in contact with a forest of spires, statues and gigantic gargoyles. 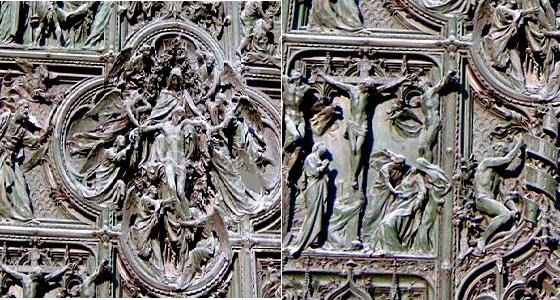 The bronze doors are decorated in bas-relief which tells the story of the life of the Virgin, Saint Ambrose and scenes from the life of the city. Worth noting, around the apse, the Gothic fretwork on the stained glass windows showing a snike (biscione) swallowing a man, the Visconti symbol.
Internal excavations have recently brought to light the ruins of a baptistery dating back to the IV century.
Inside, the grandiose vastness of the temple and the suggestiveness emanating from the weak polychrome lights reflected in the great windows create an atmosphere of respect and religious silence. Divided into five aisles with a transept of three aisles, the Duomo is occupied by very 52 high pillars which support the vaults. All along the sides are mausoleums and the tombs of illustrious figures frescoes and sculptures.


Do you want to see more fascinating places in Milan?