Other interesting places at Venice

The Correr Museum:
It contains a collection of documents and relics of the life of Venice from the XIV to the XVIII centuries, and a valuable and important art gallery, among others, masterpieces by Giovanni Bellini (La Pietà) and the marvellous "Ritratto di un giovane col berretto rosso" by Carpaccio. 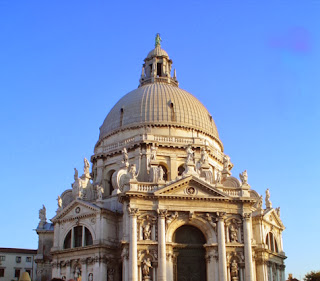 Santa Maria della Salute:
This large Baroque church, which is at the beginning of the Canal Grande, is one of the most famous and imposing architectural landmarks in Venice. Built thanks to the end of the plague in 1630 by Baldassare Longhena and finished after his death, it has an octagonal shaped central space surmounted by a large hemispherical cupola and surrounded by six chapels. The group of sculptures on the main altar represents the Virgin with Child who protects the city, but the best paintings are in the sacristy on the left: the altar piece by Titian and on the ceiling other paintings of the artist. On the opposite wall a large work by Tintoretto "Le nozze di Cana" dated 1551.

The Museum of Naval History:
During the splendour of the Serenissima, on the day of the Sensa (Ascension) the cruise ship of the Venetian navy (il Bucintoro) escorted the Doge to the lagoon to celebrate the marriage of the City with the sea. The Museum of naval History has a copy of this magnificent vessel and a series of gondolas and mementoes from the time of the marine Republic.

The Guggenheim Collection:
Palazzo Venier dei Leoni (nicknamed the "Unfinished" since it was never built beyond the ground floor) contains one of the most important collections of modern art in Europe: 200 paintings and sculptures representative of almost all the modern and contemporary artistic movements. There are works by Mirò, Picasso, De Chirico, Magritte, Kandinsky, Mondrian and Marini.

Gallerie dell'Accademia:
The biggest collection of Venetian art is housed in three buildings which once belonged to the monks. The paintings are on a floor divided into 24 rooms or sections. Look out for  "La leggenda di Sant'Orsola" by Vittore Carpaccio, "L'Incoronazione della Vergine" by Paolo Veneziano, "La tempesta" by Giorgione, "Il trafugamento del corpo di San Marco" by Jacopo Tintoretto and many other works by Lorenzo Lotto, Titian and Paolo Veronese.

Ca' Pesaro:
This magnificent Baroque building is the Gallery of Modern Art, which has a permanent exhibition of artists like Bonnard, Matisse, Klimt and Mirò as well as works by Italian artists of the XIX and XX centuries and the Museum of Oriental Art which has a singular collection of Japanese, Chinese and Indonesian hand crafted objects.

The basilica dei Frari:
The basilica Santa Maria Gloriosa dei Frari, a temple of the soul and sacred art, is a great and simple Gothic church. The first church was built by the Franciscan monks from 1250-1338, but was replaced by a bigger building by the first half of the XV century. Entering the basilica from the main door one is struck by the majestic and imposing sight of the interior as a whole, before stopping to admire the individual masterpieces. The greatest artists, among whom Titian, Giovanni Bellini and Donatello, wished to enrich it with their most significant works. Once past the main entrance of the Basilica, the simple Gothic style of the exterior gives way to the rich Baroque of the interior facade. The statue of Titian is placed in the centre, crowned with laurel. The funeral Monument to Canova, a neo-classical marble pyramid, is however similar to the original project which the sculptor had created for Titian and which is in the Correr Museum. Don't miss "La madonna di cà Pesaro" and "L'Assunta" the resplendent work by Titian which dominates the main altar.

Palazzo Mocenigo:
The headquarters of the History of Fabric and Costume Centre, shows a series of magnificently made garments and accessories . Don't get lost going through the rooms decorated with polychrome marble.

The Natural History Museum:
In the XIII century this building, Fondaco dei Turch, called "Fondaco" that is "warehouse" because the Turks used it in 1621 as a goods depot, was one of the biggest buildings looking onto the Canal Grande. Since 1924 it has been the home of the Natural History Museum. Worth seeing of the more representative exhibits are the fossils of a 6m long Ouranosaurus nigeriensis, a prehistoric biped dinosaur, of an ancestor of the crocodile, Sarchosuchus imperator; the remains of a large quadruped dinosaur of Madagascar, a large Ittiosauro (marine reptile, on a slab) from Germany and a flying reptile (Pterosauro) from Brazil.

Saints John and Paul:
This large Gothic church, more commonly known as San Zanipolo, was built between the XIII and XIV centuries by the Dominican friars and is surprising in its size and its austerity of style. Defined as the Pantheon of Venice, it contains the funeral monuments of 25 Doges, many of which are real works of art. In the Chapel of the Rosary, is the "Adorazione dei pastori" one of the many works by Paolo Veronese which decorate this and many other churches in Venice.

Ca' D'Oro:
Once considered to be one of the most luxurious buildings in Venice because of its polychrome facade, went through a period of decline after all the restoration work done to it over a period of five centuries, until the Baron Giorgio Franchetti bought it at the end of the 1800s to turn it into an art gallery.

Inside you can admire works by Andrea Mantegna, Sansovino, Luca Signorelli and Carpaccio. There are also paintings of the Flemish school and the remains of the mural decorations which once embellished the facades of the buildings looking onto Canal Grande. On the ground floor the parapet of the well by Bartolomeo Da Bon, a masterpiece in red Verona marble of 1427.

Do you want to see more fascinating places in Venice?