What to see in Florence 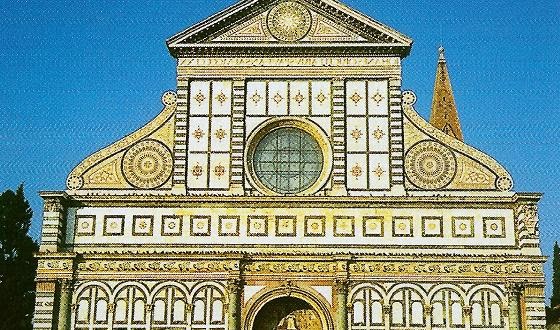 The Dominican church stands on the site of a 10th century oratory.
The existing building was begun in 1246 by the Dominican friars Sisto and Ristoro, but it was only in 1360 when the work of  friar Jacopo Talenti of Nipozzano, were completed.

The famous facade begun in 1300, was resumed in 1456-70 by Leon Battista Alberti on commission of the merchant and banker Giovanni Rucellai.

For this Renaissance masterpiece, Alberti drew on the elements present in the ancient Romanesque Florentine churches, like the two- coloured marble covering and the arcaded recesses. A genial innovation was the two lateral connections which enclose large inlaid discs.

The Franciscan basilica of Santa Croce, traditionally attributed to Arnolfo di Cambio, was begun towards the end of the XIII century, but only consecrated in 1443. It is one of the most beautiful Gothic churches in Italy, even though the facade, in Carrara marble with squares of green marble, was only covered in 1863 presumably to a design by Simone del Pollaiolo known as  “il Cronaca”(1457-1508).

The Gothic interior is in the shape of an Egyptian cross divided into three aisles by octagonal pillars sustaining grandiose pointed arches.

Don’t miss The Cappella de’ Pazzi, designed by Brunelleschi, where there are the Luca della Robbia’s Apostles medallions in terracotta  inserted in the white plasterwork  and  the  frescoes by Giotto showing the life of St. Francis in the Cappella Bardi.

Above piazzale Michelangelo, slightly removed from the city centre, is the cathedral of San Miniato al Monte which with its monumental cemetery (where the tombs of  Senator Spadolini and most of Florence’s illustrious citizens can be found) looks out over the whole of Florence.

After the baptistery, it is one of the greatest testimonies of Florentine Romanesque architecture.

Already in existence at the time of Charlemagne, it was rebuilt by the bishop Hildebrand after 1018 and completed in the ornamental parts only at the beginning of the XIII century.

The facade, begun in the XII century and completed at the beginning of the XIII , has the typical Florentine decoration in green and white marble from Prato in geometric divisions.

In 1594 the convent of San Miniato was incorporated.

Beyond the building is the Fortezza, built in a few months under the guidance of  Michelangelo and permanently constructed in 1553 by Francesco da Sangallo.
Email ThisBlogThis!Share to TwitterShare to FacebookShare to Pinterest
Tags Dante, Florence, Giotto
Newer Post Older Post Home