What to see in Milan 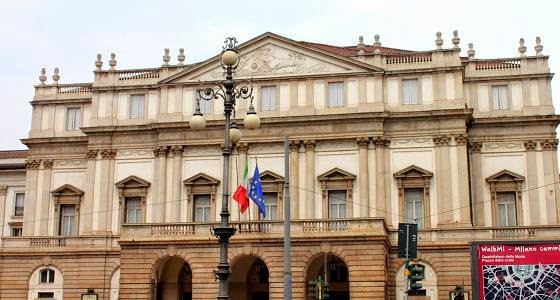 Standing in the centre is the monument to Leonardo da Vinci by Pietro Magni (1872), to the left side there is the Teatro alla Scala and on the right side Palazzo Marino, since 1860 the seat of the municipal representation.

The Teatro alla Scala, built in 1778 by Giuseppe Piermarini, known simply as La Scala, is the world’s most renowned opera theatre for the perfection of its performances and because it represents the goal and aspiration of every singer and musician.


The rather simple exterior has a neo-classical style facade and is preceded by a small porched atrium.

The inside is sumptuous; the horseshoe-shaped concert-hall with four rows of boxes and two galleries was carefully rebuilt after the serious damage it suffered in the last war.

To attend a showing you have to buy the tickets some months ahead, those who are unable to plan their holidays so far ahead can visit the theatre museum which has a precious collection of objects and heirlooms related to the history of the theatre and theatrical art from ancient times up to the present day.
The Verdi collection is of particular interest , a rich iconographical documentation of the life of the maestro as well as signed scores of his compositions.

Palazzo Marino is a magnificent building and one of the most famous in Milan.
Begun in 1553 by Galeazzo Alessi on commission of a Genoese merchant, Tomaso Marino, it was completed by Luca Beltrami in 1892.

Inside as well as the beautiful covered courtyard on coupled columns and the loggia which is richly decorated there is also the Sala Alessi ornamented with stuccoes and paintings. 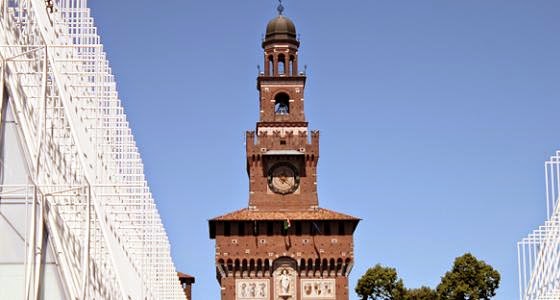 The first castle built on this site was the one constructed by the Visconti family and destroyed at the end of their reign halfway through the XV century.
The old manor-house, designed by Bramante and Filarete, underwent various facelifts, transformations and extensions over the centuries and from being a sumptuous residence became a military stronghold.
In 1880 its complete demolition was ordered, but the architect Beltrami, assisted by a group of illustrious citizens, prevented any tampering and began its restoration by installing in the three spacious central sections, the Piazza d’Armi, the Rocchetta and the Corte Ducale, the Civic Institutes of Art and History.
Inside the palace, in the 32 rooms containing sculptures, paintings, furniture, tapestries, musical instruments, jewellery, glassware and ceramics, one can admire real masterpieces like Michelangelo’s unfinished Pietà Rondinini (1564), his last work.

It’s one of Milan’s older churches and historically one of the medieval buildings most worthy of note in Lombardy.

Begun in 379, it was constructed to a small scale with three naves and without a transept.

It was consecrated by St. Ambrose who was Bishop of Milan in the IV century and Patron Saint of the city.

Over the centuries changes were made to the original style, including modifications by Bramante, but the building conserves the majestic and solemn air of the old basilica. A medieval gate leads to the entrance door, flanked by two bell-towers. Inside, the pulpit and the extraordinary IX century altar, surmounted by a canopy decorated in gold and precious stones, are worthy of note.

Inside the crypt is the tomb of the Saint.

This houses an impressive art collection which the nobleman Gian Giacomo Poldi-Pezzoli (of whom there is a painting in the entrance hall by Francesco Hayez) managed to assemble in his residence.

The most important collection of Roman and Paleo-Christian ruins present in Milan is housed in this church.

The basilica was built in the IV century probably on top of a Roman amphitheatre and later rebuilt in the XII and XVII centuries.

Opposite the church there are 16 Roman columns and a statue of the Emperor Constantine.

Paleo-Christian sarcophagi are contained inside the chapel of Sant’Aquilino, a Romanesque chapel decorated with IV century mosaics.